Okay, so this recipe isn’t exactly suitable for the nomadic lifestyle, or it can be, depending on how advanced your mobile home is. My reason for sharing this recipe is because it came out so unbelievably delicious, I couldn’t deprive my tribe. My friend Danielle and I (the one who helped me with Nomadik Healths easy Vegan Chili and easy Vegan Pesto recipes), were having one of our famous cooking nights on a brutally cold evening. I thought “I’m in need of a comfort food fix, let’s attempt a vegan shepherds pie”. Traditional Shepherds pie is made with lamb, but is often made with beef. Considering I was never a fan of lamb even before my vegan days, we opted for the beef flavor. The hardest part about this recipe was coming up with a soy-free, beefy base (I avoid soy for hormonal reasons). Of course Danielle was up for the challenge.

So, we brain stormed. I’ve ground up mushrooms as a meat replacement before, but it was always too soft. We needed something to add a little more texture and firmness, but not take away from the meaty appearance. Suddenly, it dawned on me. Let’s add walnuts in the processor with the mushrooms and later incorporate brown lentils in the recipe! Holy crappoli…what a match made in heaven. I felt like I made a scientific discovery. It looked so much like ground beef, my social media DM’s blew up with “ok, what the hell did you use….thats gotta be meat.” and “are you not vegan anymore?!”. Danielle and I were stoked, but we only solved half the equation. Texture is nothing without flavor.

Maintaining that beefy flavor is essential in recreating a not-so-shepherd-shepherds-pie. I’ve been obsessed with Better than Boullion Vegan Broth and have been adding it to so many recipes. I couldn’t find the beef replacement version so I took a chance with the chicken one and it came out awesome. In addition, we added thyme, rosemary, vegan warcestershire sauce, and Miso paste (this helps bind).

For starters, the smell was INSANE. All of the ingredients complimented each other so much in both flavor and aroma. Once we took our first bite we couldn’t believe how much we nailed our concoction on the first try! Danielle not being fully vegan really helps verify what tastes close to the real deal. Ugh, just writing about this recipe is making my belly growl. Okay, enough talking, let’s make this vegan shepherds pie!

Funny story about these mashed potatoes… I accidentally bought vanilla flax milk instead of the original. I thought I totally soiled it! (Spongebob reference). Seriously, I was nervous… but IT TURNED OUT AMAZING, don’t be afraid to try it.

*This post contains affiliate links. As an Amazon associate, I earn a small percentage based on qualifying Amazon purchases. Purchasing these products through my links helps me continue to put out content. Your support is greatly appreciated.* 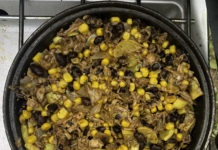 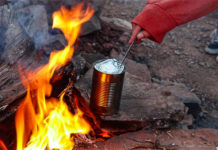 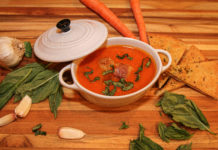 Bring Your Skin Back to its Original State